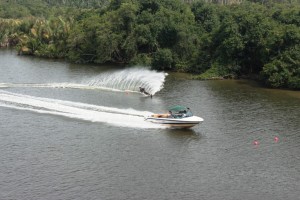 It was a bright and sunny morning, on Sunday the 1st of April 2018, as the skiers congregated at Kumudu Valley Resort, 60 km north of Colombo, one of two ski sites in Sri Lanka , the other in Bentota, the traditional home of water skiing in Sri Lanka.

The competition took place in the grounds of the Kumudu Villas, within the  Kumudu Valley Resort complex, recently completed to accommodate those who wish to spend a waterski vacation along with family and friends. The two adjacent villas share a private pool with direct access to the ski jetty and a traditional tea house over-looking the lake and close to the beach. The owner Ulf Unbehaun, sponsoring the open championship, donated the first prize for the champion of a complimentary weekend stay at one of the villas.

Having completed the inaugural national slalom championships on Saturday, the skiers’ best scores were carried forward   and added to their scores on the Sunday to determine the open champion. 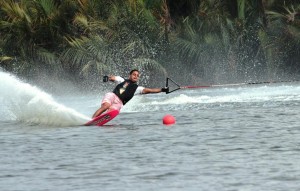 Going into the open Sri Lankan National Champion, Giyan Kurukulasuriya (SRI), who represented Sri Lanka at the IWWF Asia Waterski Championships in Guangzhou in 2004, was tied on points with 13-year old John Knight (HKG). John’s father was lying 3rd just 0.75 points behind whilst Max Newton (GBR) was just one point behind the leaders.

First off the dock was Sujith Piyanadana (SRI) who improved on Saturday’s score with 3/55/18. Max Newton (GBR) comfortably ran the course at 52kph but looking unsettled on the return pass still managed to score 5 buoys 5/55/l8. Caleb Knight (USA) likewise could not match his first round score with 2.5 buoys to secure at least a podium position.

Second last off the dock John Knight (HKG) starting at 46kph ran 4 clear passes before shortening to the 16-metre line, where he rounded 2 buoys for 2/55/16 to take the lead.

Having strained himself in the Nationals Giyan Kurukulasuriya (SRI) had been hesitant to ski, but could not resist the challenge clearing 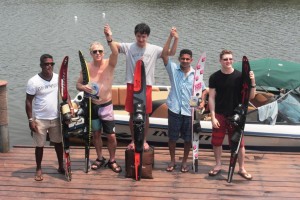 the 52kph pass and finishing with 3.5/ 55/18 to take 2nd place  in the Open and win three free passes of course donated by Holger Bruemmer at the Kumudu Valley Resort.

Holger Bruemmer, organiser of the event, was pleased with the close competition between the skiers and delighted at the standard of the Sri Lankan skiers who skied courageously.